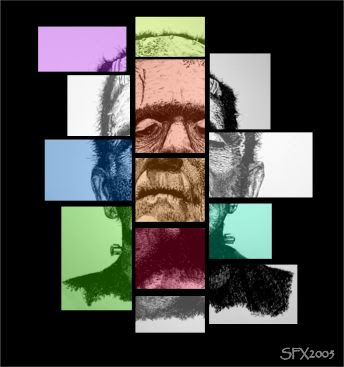 I showed up 4 minutes late for this play.
God, I feel terrible about it.
Here's the plot as best as I can describe it minus the first four minutes:

Percy Shelley, Lord Byron and Doctor John Polidori have just arrived back home from the Bow Tie Convention and are ready to tear some shit up. They get to Byron's house and there's a pool table and some pianos and shit so they can all get weird and talk about sports and poems and chicks when who is waiting at the house? All the pregnant hos the dudes were trying to avoid. There is Mary Shelley, Percy's wife. But Percy hates her because they lost a baby before, but now they have one and there's another in the oven, hey pal, that's 66% (and you are a poor idiot poet), why don't you shut up and relax. Also, Percy gets to take another chick with him wherever he wants named Claire Clairemont. Turns out that Claire is Mary's step sister and both Percy and Byron are probably bangin' her. Mary knows, and seems ok with it.

So here's something I dislike about period plays:
When there's lots of weird sex with family members and excessive drinking and everyone in the house is up screwin' each other drunk all night, it's accepted because we look at characters from a different time as aliens. How could WE know what life was like for them?
Well, I'll tell you what I know. It was weird even then for everyone to be having sex with each other, pounding down the funny colored wine. There should be at least one character in every period play to stand up and shout "WHAT THE FUCK IS GOING ON AROUND HERE?!!! ARE YOU GUYS ALL PREGNANT WITH EACH OTHERS BABIES!!?"
And you know what? They were.

So anyway, the biggest selling point for me before I came was that this is the story of how Frankenstein was written. I like that story. I even liked the Branagh movie.
But in this play, they don't really dig into that until close to the end of the first act, so I had to find other things to entertain me.Most notably, John Motherfucking Taflan.

Do you know who John Taflan is? He is an actor in town in general and the guy who plays Lord Byron in this play in particular. He usually plays young men on "the edge". He is the third pole in my "Axis of Beauty".

The Axis of Beauty is a triangle diagram I have above my bed. It has my three favorite actors on it. They are Rob McLean, Dan Granata, and John Taflan. They are all good for different ways, and also because they are all middle aged white men with dark hair and glasses. WOW! Think about this:
If all three were auditioning for the same role, who do you think would get it? Probably Joe Dempsey, but that's not the point. He's equity anyway, jerk.
My wife calls him "John Teflon" because he won't stick to anything for too long!

Anyway, Dr. Polidori comes in one day and is like, "I can make this dead frog come back to life."
And they're all, "No you can't."
And then they all drink some more.
And Byron's all, "I'll wager you a penny you can't"
And then he complains about having too many people in his house.
Really Byron? This fucking guy is gonna bring an animal back from the dead and all you can wager him is a penny? You're a fucking tool, pal. And the wagering stuff isn't the only reason either. You also drink too much, and act like a gay guy and probably rape your maid. Also, you have far too many bow ties, and don't pull the-"That's what they wore back then" because bow ties have ALWAYS been retarded. ARE YOU A PRESENT? Is that why you need to have a big bow on you? Whatever. I hate you, Lord Byron.
No wonder you got kicked out of England.

So the guy brings the frog back to life and nobody really seems to care except for me and Mary Shelley. She puts it in a jar that is way too small for it, and everyone forgets about it, for now.

Meanwhile, Percy Shelley is coughing a lot. Nobody knows why, and then he stops and everyone stops talking about it, which makes me think that it was a dream.

Anyway, Mary Shelley writes the opening to Frankenstein and Lord Byron gives her a recommendation to his agent. And then...
*SPOILER ALERT*
She throws that dead ass frog out the window, because frogs can't travel on boats or something, and then everybody bangs the maid.


Jessica Hutchinson is a new talent in town. For years she has been the Artistic Director of New Leaf Theatre but I hadn't heard of her till like, 2 years ago. She is nice and pretty and friendly and directs good. I don't know why she wanted to have the traverse stage, but I'm sure she had a damn fine reason. Maybe it was so we felt like we were in the room with the drunk maid fuckers.

Tom McGrath plays Percy Shelley. I had the chance to meet Tom on a couple of occasions, and let me tell you about this guy. First of all, he is short and hairy. Second of all, he has a beautiful speaking voice and usually wears glasses. He really made me feel, like, nice.

Pat King plays Doctor Polidori, the guy who was the inspiration for Doctor Frankenstein and does a great job. He is the comic relief in this dark dark play and trips up and down the set. He has a real cute baby face and in the end... I don't wanna give away the end, but let's just say he dies.

Madeline Long plays the maid that gets nailed by everyone in the house and speaks French and is learning English or something, even though she speaks pretty good English for a French person already, even nowadays. She has the most thankless part in this show and does a great job. Have you ever auditioned for a play and they are like, "You got a part!"
You're all like "Cool, what is it?"
They're all like "You are the maid. AND you have to learn a French accent, AND your story arc is the weakest, AND your car is being towed."

Danielle O'Farrell is a young redhead in town that plays the stupid whore named Claire Clairemont in this play. She is attractive and a good actress and went to Roosevelt University. You can also tell she had braces when she was a kid because her smile is so straight.
So what I'm saying is... when you put all those facts together, I bet she is a lesbian in real life.

Lastly, the real workhorse of the show is a young woman named Hillary Williams. She plays Mary and is incredibly watchable. She carries this play on her back from beginning to end and does it all with a robot baby on her boob. Also, if you get bored, you can look at her nose ring.

The real heroes of this show are Anders Jacobson and Jody Radovsky, Sarah Ramos, and Eric Branson. They are the designers of this glorious and weird world and prove that Live Wire has a nice chance at making a name for themselves because picking designers is the most important thing.

Go and see this play!

You can email us with ideas or naked pictures of your family!! 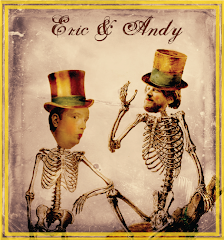